Arterio-venous retinal communications are abnormal anastomoses between a vein and a retinal artery. These anastomoses may or may not include an interposed capillary network.

The lesions are classified in 3 groups:

Groups II and III may be associated with cerebral vascular abnormalities. This is known as the Bonnet-Dechaume-Blanc or Wyburn-Mason syndrome.

The frequency of these abnormalities in the general population remains unknown.

Arterio-venous retinal communications appear to be congenital abnormalities. To date, no hereditary factor has been identified to explain these lesions. 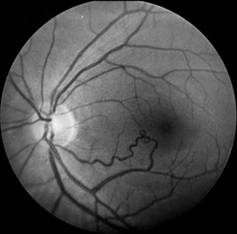 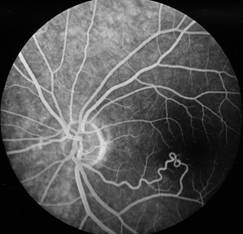 Fig 2 : direct communication between an artery and a retinal vein, with no interposition of capillaries. This is therefore a Group II arterio-venous communication. It is even more clearly visible on the fluorescein angiography (right).

Group III: visual acuity is altered in most cases. The vascular abnormalities are obvious upon examination of the fundus. The anastomic vessels are dilated and located along an unusual pathway. The abnormalities may be located at one quadrant or extend right across the fundus. Fluorescein angiography shows very rapid blood flow within the abnormal vessels and it may be difficult to distinguish between arteries and veins. There may be leakage of dye and spontaneous retinal vascular occlusion (fig 3).

In the Bonnet-Blanc-Dechaume (or Wyburn-Mason) syndrome, there may be vascular malformations in the brain and jaw. A number of cases of dermal angiomas have also been described. 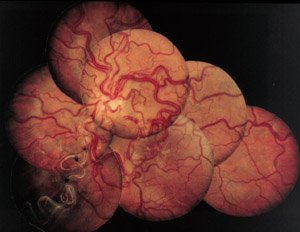 There is no treatment to re-establish a normal vascular path. In patients in Groups II and III with severe loss of vision as a result of serous retinal detachment of the macula or a spread through the communication, laser photocoagulation may be offered. Vascular occlusions usually resolve spontaneously. Laser photocoagulation will only be proposed for patients with vascular occlusion leading to extensive retinal ischaemia. Haemorrhages of the vitreous persisting for more than 3 months are treated by vitrectomy.

Search
the site of CERVCO